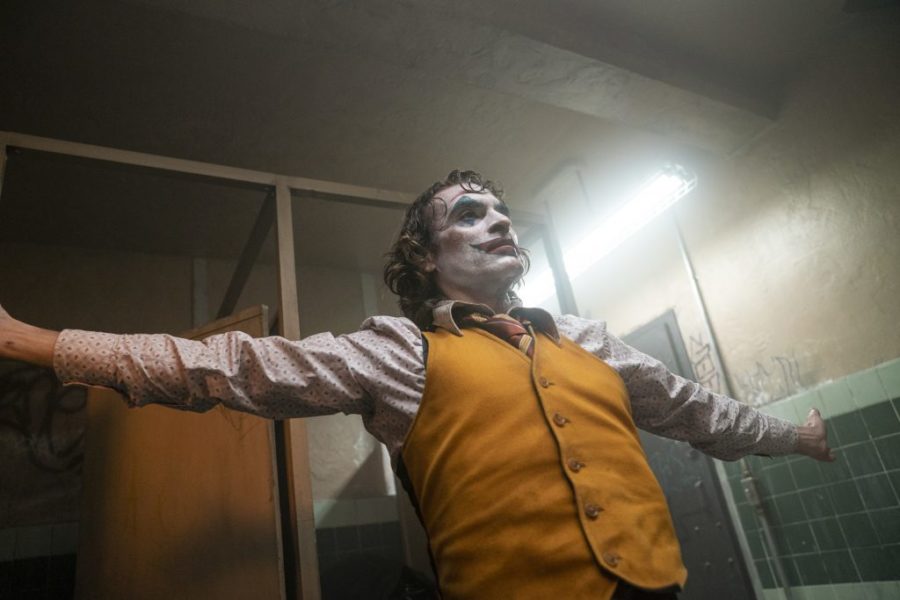 While already a box office smash, the new Joker movie has also created some controversy over concerns of violence, with an increase of police presence at showings. (Warner Bros. publicity still)

While already a box office smash, the new Joker movie has also created some controversy over concerns of violence, with an increase of police presence at showings.

More than a movie: New ‘Joker’ adaptation brings both fans and controversy

The newest Joker movie released on October 4 has drawn both a large crowd of fans yet has also been the center of controversy.  In this side-by-side story, we have written both a review of the Joker movie as well as an editorial to go in-depth about what has made this movie such a hot topic of discussion.

No ‘Joking’ Matter: A remake for today’s generation (Review)

Joker is a haunting movie that will make you laugh, cry, and question your way of life.

The movie focuses on the miserable life of Arthur Fleck (Joaquin Phoenix), a worn-down aspiring stand-up comedian. Throughout the film, we see the events that cause this mentally-ill man’s spiral into madness.

I think the movie is extremely well done in most parts and is a must-see. It is different than any movie made in a long time and especially different than all recent superhero blockbusters.

There are many scenes in the movie that are very brutal and/or sad, that will leave you thinking about how you treat others. For example, the opening scene has Arthur getting the sign he was advertising with stolen from him, then he is jumped by the kids that stole it.

One big issue the movie focuses on is Arthur’s mental illness. He suffers from a disease that causes him to laugh uncontrollably, and he also imagines things happening that aren’t real. Arguably the saddest thing in Joker is the way our society treats Arthur. All he wants to do is “put a smile on people’s faces.” But he is continuously beaten down and has his soul crushed.

Joaquin Phoenix’s take on this iconic character is one of the best. While many try and compare it to Heath Ledger’s Joker, the two are so entirely different that it is  impossible to do so. Todd Philip’s directorial job can be seen strongly throughout the film in little ways, such as Arthur’s sickeningly thin body, a limp when he walks, and the darkness that clouds Gotham for the majority of the movie.

While most of the soundtrack is depressing melodies, one of the highlights of the whole movie is the Joker dancing on a staircase to Gary Glitter’s “Rock and Roll Part 2.” Seeing Arthur embrace his inner madness as he finally becomes the Joker is a very odd yet empowering scene beloved by all fans

There has been a lot of backlash since this movie’s release, claiming that it would cause people relating to Arthur to act on their fantasies and cause chaos. While no violent events have occurred many showings are still being patrolled by police looking out for suspicious behavior, with the Federal Borough of Investigation even investigating some shooting threats.

While no sequels have been confirmed, Phoenix has stated that he is interested in working with Philips again on a similar project.

If you are looking for a film with character, tragedy, triumph, and tons of violence, you will want to see Joker.

Joker: Preparing instead of preventing (Editorial)

With the release of Joker, a controversial movie featuring scenes of violence and harassment, many have taken it upon themselves to point out the type of actions that could come with a bold movie.

Many fear that the movie will encourage violence, with multiple news sites publishing updates warning moviegoers of potential threats to their safety at premieres of the film. Some federal agencies have also published warnings, which have been posted online.

These threats are not taken lightly, especially with the increase in mass shootings nationwide, and with the 2012 shooting at the Aurora, Colorado premiere of The Dark Night Rising still fresh in the minds of many. The family of the victims of the Aurora shooting even called upon Warner Brothers to take extra precautions regarding the movie.

Questions regarding the results of focusing on a character like Joker, one who goes on a murderous rampage after being rejected by those around him, have been raised.

Many people claim that Joker would influence new shooters, but some argue that linking Joker to real-life violence is extreme.

The movie questions how people treat each other, and how general “society” plays into controversial pieces of media. It brings up important questions, such as whether or not the media doing its job by covering these potential actions, and if constant coverage increases the chances of a shooting happening.

Not only does it question the goals of news publishers, it questions why are we warning people to be vigilant of shooters?

Instead of singling in on the possibility of a shooting happening, or people doing actions in the name of relating to Joker, we should focus on preventing these actions before they become a tragic reality.

Disclaimer: Articles designated as “Editorial” represent the views and opinions of the author, not the 2019-2020 Periscope staff, CHS/CASD administration, or the CHS student body.