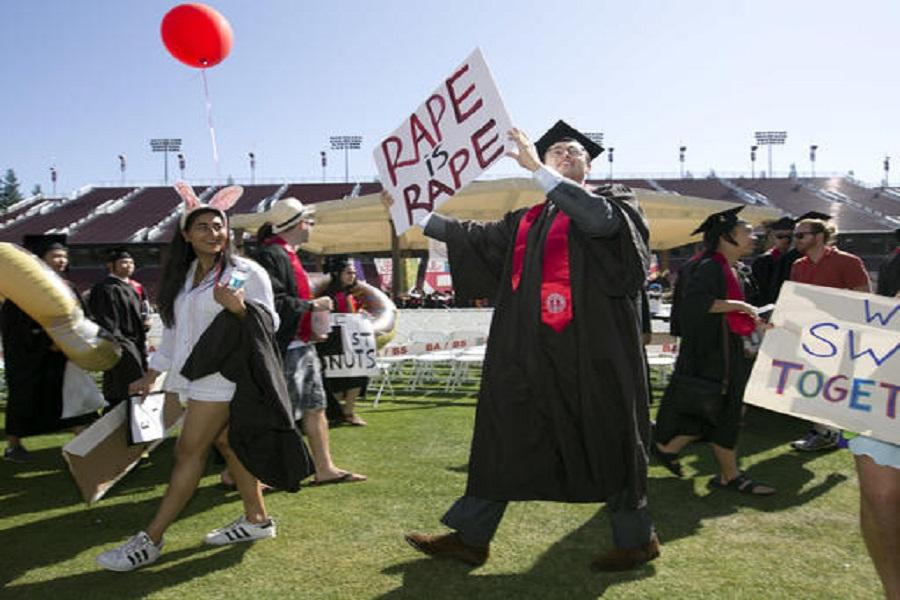 Paul Harrison, center, carries a counter-protest sign at the Stanford University graduation exercises, Sunday, June 12, 2016, at Stanford Stadium in Stanford, Calif. Women’s advocacy organizations are urging a California agency to take action against the judge who sentenced a former Stanford University swimmer to six months in jail for sexually assaulting an unconscious woman. Harrison argued that the assault was not indicative of a “rape culture” at the university, and unfairly blamed the school for the attack by a man who just happened to be one of their students.(AP Photo/D. Ross Cameron) (ASSOCIATED PRESS)

Paul Harrison, center, carries a counter-protest sign at the Stanford University graduation exercises, Sunday, June 12, 2016, at Stanford Stadium in Stanford, Calif. Women’s advocacy organizations are urging a California agency to take action against the judge who sentenced a former Stanford University swimmer to six months in jail for sexually assaulting an unconscious woman. Harrison argued that the assault was not indicative of a “rape culture” at the university, and unfairly blamed the school for the attack by a man who just happened to be one of their students.(AP Photo/D. Ross Cameron)

What you need to know: Brock Turner

As a staff, CHS Periscope will be highlighting the important national and international topics that appear in the news this school year. We are doing this so that the student body knows what is happening nationally and becomes more educated on current pressing issues. So please check back with us periodically to see what you need to know!

Our first topic is actually a two-part feature on Brock Turner.

Brock Turner, a former student at Stanford University and also one of their star swimmers, was convicted of three felony counts of sexual assault and sentenced to only six months behind bars.

The conviction came from an assault that occurred on January 18 of 2015.  Turner was seen behind a dumpster at a fraternity house raping an unconscious, half naked classmate by two graduate students who chased after Turner and held him down until the police arrived.

“He alleged that the two were hooking up at the party and he only fondled her. He was released on $150,000 bail” according to Us Weekly.

On October 6 of 2015, Turner attended his preliminary hearing with his defense attorney where he again pleaded not guilty and had both the rape of an  intoxicated person and rape of an unconscious person charges dropped but would still stand trial for the other three convictions.

On March 30 of 2016, Turner was found guilty and could spend a maximum of ten years in prison.

On June 2 of 2016 Turner was sentenced to six months in prison, three years probation, and must register as a sex offended according to Judge Persky.

Persky reportedly stated that “a prison sentence would have a severe impact on him. I think he will not be a danger to others,” according to People Magazine.

On June 3 of 2016, the victim wrote a letter to Turner in which she spoke in front of the court and since then that letter has been published on several social media outlets.

The letter discusses the assault and the effect on not only her, but her family; the victim wrote, “You took away my worth, my privacy, my energy, my time, my intimacy, my confidence, my own voice, until today. The damage is done; no one can undo it.”

On June 5 of 2016, a letter from Brock Turner’s father, Dan Turner, emerged in which Dan Turner wrote, “That is a steep price to pay for 20 minutes of action out of his 20 plus years of life,” defending his son and pointing out that the court was overreacting in their conviction.

On June 6 of 2016 Michele Dauber, a Stanford law professor, created a change.org petition to recall Judge Persky because  of the light sentence he gave to Turner.

The petition states “Judge Persky failed to see that the fact that Brock Turner is a white male star athlete at a prestigious university does not entitle him to leniency. He also failed to send the message that sexual assault is against the law regardless of social class, race, gender or other factors.”

On September 2 of 2016 Turner was released from prison, after only serving half of his original sentence due to good behavior; this led to a public outrage.

On September 3 of 2016 Turner’s family home in Ohio was swarmed by protesters in which the Turner family called the police to handle the situation.

Currently, Turner is staying in Ohio where he must register as a sex offender and keep registering every 90 days for the rest of his life.

According to CNN, “anyone living within 1,250 feet of Turner’s address will be notified with a postcard. And he will not be allowed to live within 1,000 feet of schools or playgrounds, the sheriff said.”

Brock Turner given too much leniency (Editorial)

For the majority of 2016, America was in outrage over the events of the Brock Turner trial. The case went national after the victim wrote a letter to Turner, the man who assaulted her. People were infuriated by how lenient the judge was in giving Turner such a short sentence.

Despite having more than a dozen witnesses and the victim’s blood alcohol content being above 0.2 at the time of the assault, Turner was sentenced to only six months in prison. He could have served up to 14 years for the assault. Instead, he only served 3 months.

A prison sentence would “have a severe impact on him” according to the judge, Aaron Persky. Yet, have they considered the impact his actions had on the girl he assaulted? While Turner’s parents worry about his loss of appetite, his victim says she “wanted to take off my body like a jacket and leave it at the hospital with everything else.” She also wrote that she “didn’t talk, didn’t eat, didn’t sleep, didn’t interact with anyone.”

“These verdicts have broken and shattered him and our family in so many way,” Turner’s father argues. He seems to forget about what the victim and her family had to go through. She had to sit through a year-long trial while the man who assaulted her claimed his only fault was in drinking too much.

Rape culture is defined as blaming the victims of sexual assault while normalizing male sexual violence. The letter Turner’s father wrote in response to the victim’s letter spoke of how Brock Turner’s life was affected by what happened. He wrote that “incarceration is not the appropriate punishment for Brock” and “probation is the best answer.” Showing Turner leniency would only be showing other rapists that they can get away with similar actions.

Some judges show leniency to those who show remorse in court, while others shorten the sentence for those who plead guilty. Brock Turner has done neither of these things. He refused to acknowledge that he assaulted the woman through the entire case, yet still was only sentenced to three months.

The U.S. court system was put into place to provide justice for the victims of a crime. Judges like Persky prevent that from happening by showing leniency to criminals based on their background. Turner being a Stanford athlete shouldn’t allow him to get a shortened sentence than anyone else who committed the same crime.

Disclaimer: Articles designated as “Editorial” represent the views and opinions of the author, not the 2016-2017 Periscope staff, CHS Administration, or the CHS student body.