Community comes together to ‘Save our Smalls’ 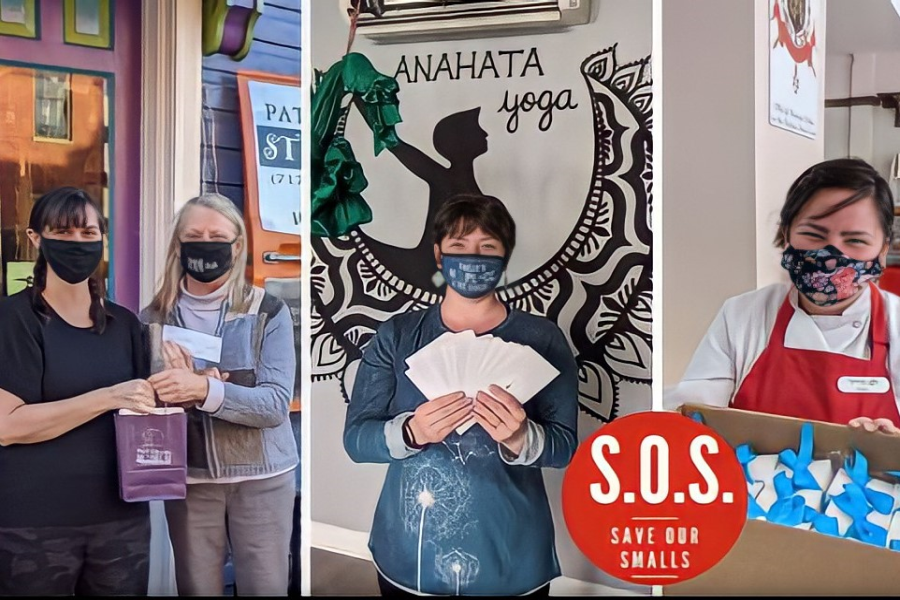 NEVER ALONE: Small businesses have definitely taken a hit financially in the passing year and because of that, S.O.S is trying to give back at least some of what that last year has taken. These are a few of the small businesses that S.O.S has donated to recently holding their $300 donation, including Pat Craig Studios, Anahata yoga and Exquisite Chocolates of Carlisle.

This pandemic has affected everyone by some means, some more than others. Small businesses are one of the largest communities affected, 55% of small businesses they wouldn’t survive if sales stopped for 1-3 months and 21% said that their business would not survive even a month with no sales, according to the data firm Womply.

Small businesses specifically with 500 or less workers were the ones hit the hardest at the beginning of the pandemic, but those small businesses rebounded in employment somewhat quicker than at some larger companies since April of 2020. That being said, this pandemic is still having a substantial effect on small businesses everywhere, even in Carlisle.

Save our Smalls,  also known as S.O.S, is a non-profit donation program that is used to support the small businesses right here in Carlisle. How the S.O.S program works is that people donate money through Destination Carlisle’s website and later their team uses that collected money to buy a large item from local small businesses, “$300 buys” said Stephanie Gilbert, the founder and president of Destination Carlisle.

Afterward, the items are donated to local charities along with frontline workers in the area. Save our Smalls is an exceptional way for people to give to small local businesses and others in need all at once with just a simple donation, of any amount.

Stephanie Gilbert, also the owner of Georgie Lou’s Retro Candy, a small business in downtown Carlisle, said in an interview with CNN “[The Paycheck Protection Program is] helpful, but none of this is going to save a business at the end of the day.”

The Paycheck Protection Program, known as PPP, is a loan given by the government mostly to the smallest and businesses that were hit the hardest financially. Even with the PPP, Georgie Lou’s Retro Candy’s revenue has gone down 75% when compared to 2019, making this their worst year since they first opened over a decade ago, reported by ABC politics. This is just one of the many reasons why Destination Carlisle created S.O.S.

“With that amount, we can help 44 businesses with $300 buys,” said Gilbert. “We have made 30 of those buys so far with more in process. We give the businesses some time to get the gift cards ready.”

On an S.O.S Facebook post Tami Shaffer, the owner of No Common Scents, commented this about their program:

“What a save!! Thank you so much! This paid on a inventory bill!!

On January 14, Save our Smalls was recognized by ABC27 News as a Hometown Hero. In the article, “Hometown Hero: Destination Carlisle” Nathan Harig, the assistant chief of Cumberland Goodwill EMS said this about the S.O.S program:

“It’s such a tremendous place to work and to live and to see them rally to help the downtown small businesses and to help EMS agencies like ourselves, the hospitals, the other first responders, it just makes you feel really good where we’re at in south-central Pa.”

S.O.S made a Facebook post to show their appreciation for the recognition by ABC27 saying, “It’s wonderful to see our community recognized for its efforts to help our local small businesses, local charities, and frontline workers. Thank you for your donations and shares, and we still have more work to do.”

If you are interested in donating to S.O.S go to https://destinationcarlisle.org/save-our-smalls. There are several options for donation methods online as well as on paper checks. You can also make a suggestion on what charity or frontline working staff should get a donation via email, hyperlinked on their website.

Additionally, they have a Facebook page showing pictures of owners of the small businesses they have donated to and showing the current amount they have raised.