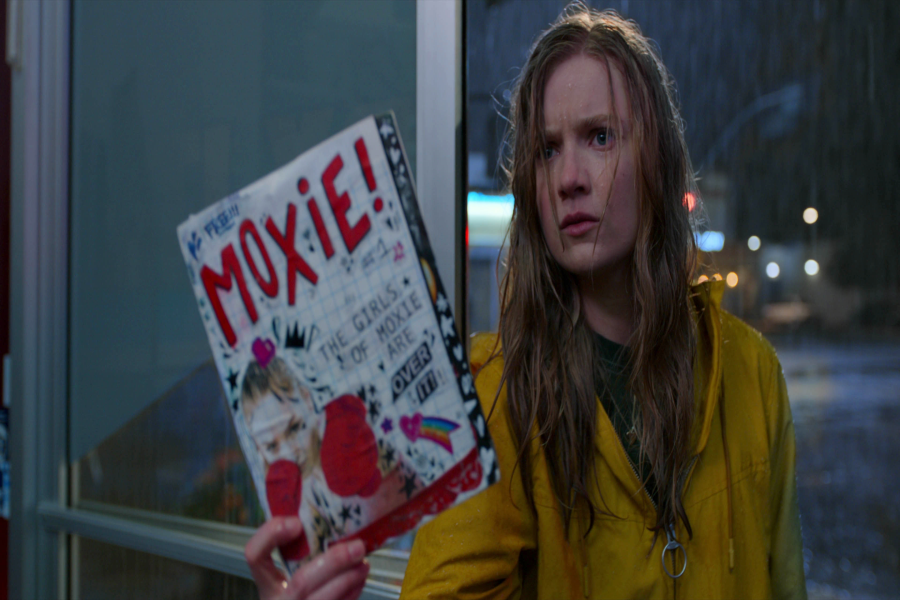 THE GIRLS OF MOXIE ARE OVER IT! A new Netflix original movie starring Vivian (Hadley Robinson) as she creates her own zines to spread in the girls bathrooms to combat sexism in her high school.

There have been many forms of protest, from chanting in the streets, raising signs like weapons of war, to using duct tape over the mouth to let silence and stubbornness speak for itself. Then you have the riots, the marches, the loud ‘hear me roar’ protests that scream for change.

Over the decades, protesting, especially for violence against women and women equality, has worn many colors and shown many stripes, though it has never quite taken on the form of bathroom zines and hearts and stars drawn on hands. In the new Netflix original movie, Moxie, a rebellion adopts this 90s inspired riot trend while using Rebel Girl by Bikini Kill  as an anthem for their wave of change.

Starting like a horror story a young girl running through the woods is chased by the sound of something crashing through the forest behind her. Unable to scream, the girl plays the classic victim: helpless, lost and unable to scream for help. How does this tie into the rest of the movie? Simple: Moxie is a modern film that addresses sexism in which women are the victim.

However, the movie’s end all contradicts this theme as the characters refuse to play the victim any longer, and instead of screaming for help, they scream in anger in the face of the wall that men have created between them and being treated with respect.

Moxie premiered March 3, 2021 on Netflix, following the script of Jennifer Mathuie’s YA novel as it crashes hard and fast into the existence of sexism and the struggle of women in what seems like a male-dominant world, or more specifically in the halls and classrooms of Rockport High, where the girls are ranked yearly for their bodies and being “most bangable” and harassment is not taken as seriously as it should by the school’s administration.

The leading lady, Vivian (Hadley Robinson), a seemingly shy 16-year-old wallflower, dares to address these hard truths of her high school with the help of a new student, Lucy (Alycia Pascual-Pena) who is the first to call out the archaic and sexist behavior of the boys in their school under the alias Moxie. Inspired by her mother’s (Amy Poehler) early years of being a ‘rebel girl’ herself, Vivian experiences the difficulties of speaking up and speaking out after creating her own zine to place in the girls’ bathrooms advocating for change and the end to double standards.

The target of her rebellion starts with Mitchell and his posse, the popular football player played by Patrick Schwarzenegger who preys on women in her school through inappropriate comments, sexual harassment, and a form of bullying that belittles and demeans women. Claiming that annoying is more than just annoying and that certain behavior can become dangerous if not checked, Vivian, along with a group of girls, award him with the title of being the biggest contributor to sexism in their school and starts a campaign for female athlete Kiera (Sydney Park) to win what was previously seen as Mitchell’s sports scholarship.

Largening the scale. Vivian then goes after the school’s administration for turning a blind eye and letting the boys in her school get off easy with the saying, “Boys will be boys.”As the characters of Moxie start a war with the stereotypes and double standards placed upon women, the important question is asked: Why is no one talking about this?

High school has its struggles. As a boy, there are just as many stereotypes for them as there are for girls, like the phrases “Be a man” and “Men don’t cry.” Society says it’s normal to tell boys that they can’t like the color pink and are given high expectations to meet so that they can embody what it means to be a “man.”

For girls, the struggle is there but there are some differences. For girls, they are told what to do, what to wear, and for the sake of men, to be submissive and compliant. These stereotypes feed the toxic atmosphere that is within high school and in everyday life, which makes it difficult to speak about topics such as sexism, as it is tiptoed around as if not to offend anybody or is ignored to avoid causing problems. But it is a problem that needs to be addressed nonetheless and it is one that Moxie tackles with a classic coming-of-age storyline.

And while Hollywood likes to dramatize reality, Moxie is still able to embody the harsh truth of how men often treat women. However, the character Seth (Nico Hiraga) acknowledges that it would be wrong to claim that all men are the issue. While the film demonstrates how women fight to be taken seriously and try to stop the harmful stereotypes that objectify and sexualize their clothes and their behaviors, it also assures that the struggles of women do not outway the struggles of men. Instead, it issues a call to arms to bring down the injustices against both genders.

As far as bystanders go, they are just as much a part of the problem as those who outright attack and enforce the pig-like behavior towards women. In the movie, it is clearly stated that if you are doing nothing then you are a part of the problem, which the character’s English teacher (Ike Barinholtz) experiences when the backlash of tolerating and quietly encouraging certain toxic behavior is called out by a girl who was dress coded for wearing a tank top with spaghetti straps.

This goes without saying that it applies to both men and women who do nothing. However, the movie is quick to address that silence should not always be mistaken for compliance. There is a fear in women for standing up and standing out, the very fear that Vivian’s best friend Claudia (Lauren Tsia) portrays as she claims to “let me do this my way.”

Touching on other important topics such as cultural insensitivity, LGBTQ pride, and the challenges of minorities, Moxie stands as an empowering film for women and anyone else who dares to speak out against the prejudice and inequality that the individual and the majority may experience.